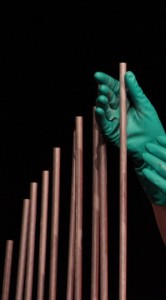 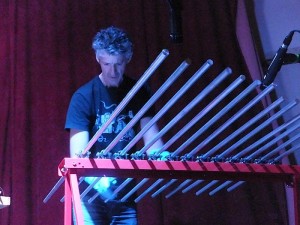 The Vibrissa were inspired by “singing rod” demonstrations of resonance and longitudinal vibrations in physics lessons.  http://www.physicscentral.com/experiment/physicsathome/rod.cfm

The stroking/pulling movement actually stretches the rod slightly, giving it potential energy. This is analogous to the potential energy of stretched spring or a rubber band. The metal rod is an elastic solid which elongates slightly when pulled. When the rod is played, both of its ends simultaneously vibrate longitudinally (anti-nodes) sending vibrations back and forth along the length at its fundamental frequency.

Stroking the rod longitudinally builds up standing waves as it begins to resonate. This is very similar in feel to playing a wineglass and is dependant on touch to keep the rod sound singing. (Too much pressure will kill the sound.) Once excited, the rods have a very long sustain time.

A range of harmonics that can be excited depends on how the rod is played and where it is anchored. My instruments are anchored at the node at the rods mid-point so that the fundamental is the dominant tone, but they could also be clamped at a quarter of the length to get the second harmonic or a third of the length to get the third harmonic. The rods can be played by hand although rosined gloves seem to provide more friction and keep your hands clean..

I’ve built four Vibrissa instruments for the ensemble to play. These are microtonally tuned and as with gamelan instruments, slight tuning differences add a shimmering quality to the sound. The instruments have been through a number of different iterations as I’ve refined and developed the design:

Vibrissa  version #1 These instruments had the rods mounted horizontally and each rod had to be screwed in individually. 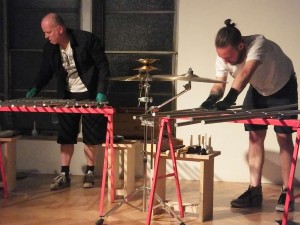 Vibrissa version #2 Vertical mounting of the bars allows players  an easier and more ergonomic playing position. These instruments are more visually interesting for the audience as they can see them being played. 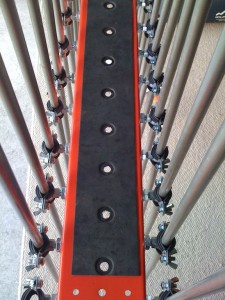 Vibrissa version #3  Currently in the R&D phase with assistance from Denis Smitka, an industrial designer friend. My intention is to have an instrument that allows easier setup and mounting of the rods plus an adjustable height so that different rod sets/tunings can be used.

Long Wires. Inspired by Ellen Fullman and Paul Panhusen’s long string installations and instruments. These also work using longitudinal vibration. Their frequency, like the rods, is dependant on length so very long wires are required. At the Liquid Architecture performance these were attached to steel resonating drums to amplify the sound.

Scuba Bells These are steel scuba tanks that were cut down to produce singing bowls and gongs.

Re-tuned Glockenspiels  Multiple sets of re-tuned glockenspiels. These have been re-tuned – some sharp, some flat for beating effects. Played with a bow or percussively.